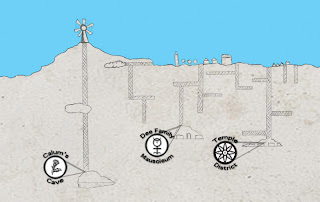 Though for many decades uninhabited, the western frontier of Caeledon is considered part of the Free and Happy Kingdom of Naus. Though unsettled and inhabited mostly by bandits, great mounds have been discovered that contain the ruins of cities from legendary empires of the past. Great treasures have been exhumed, and disreputable sorts have flocked from all over the kingdom to start a-digging, and even more disreputable sorts have come to cater to them as is digging.

As if the promise of ancient treasure ain't enough, there's good reason to believe that four treasures of particular note are somewhere out here. If this really is where the old kingdoms were located then there's a decent shot that someone is going to find them. Maybe even you.

King McAllister IV has declared that he will reward the men that bring him any of these treasures with land and title, and though he might not be the sharpest knife in the royal silverware set, he is a monarch of his word.

So here you are on the main street of Whiskey Springs. They've got this fancy little knot that they tie on your swords so you can't draw a weapon without fussing around with it first. The guy that tied them told you not to take them off except in self defense, or there would be trouble. Well, all right.
Posted by Pity Crit at 9:28 PM