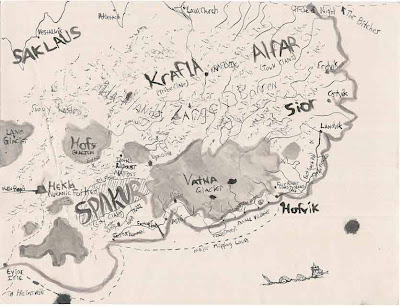 One of the better games I've ever run, this featured a war between the elemental forces of fire and ice over an isolated, fantastic version of Iceland, as a foreign tree deity tried to get its foot in the door and eliminate magic from the Island.

I delved into Iceland chic pretty hard for this one. Ambient soundtracks featuring Sigur Ros were prominent. Scandinavian folklore was shamelessly plundered, especially from the early Christian period. I used Seamus Heaney's translation of Beowulf. In that spirit, here is my take on Grendel. The low-effort art was a gestalt of the art in John Gardener's nihilistic version of Grendel, Where The Wild Things Are, and the often terrible yet occasionally good Grendel comics.

Claws +14, dmg 3d6 +5 (crit 18-20)
Bite +18, dmg4d6+10
-Pounce: Grendel may make a bite and claw attack as a standard action.
-Rend: If both the bite and claw attack hit a target during the same round, that target suffers an additional +12 damage.
-Cleave: When Grendel "drops" an opponent, he may make an immediate Whirlwind attack. This whirlwind attack will not affect any unconscious or dropped creatures.

Special Vulnerabilities: Grendel's damage reduction does not apply against critical hits from any source, nor against unarmed attacks. Critical vulnerability applies to sneak attack damage.

Bloody: When first bloodied during an encounter, Grendel may make an immediate whirlwind attack with a bonus +2 to critical threat range. If a critical hit was what rendered Grendel bloodied, he loses an arm and instead of his extra attack, he can no longer make whirlwind attacks.

Kinslayer Curse: Any creature that participates in killing Grendel must make a Willpower Save (DC 20) or suffer a curse. The curse causes all giants to enjoy a +2 bonus to attack and damage against the character. The curse may be removed via the Remove Curse spell, but additional material components worth 300 gp each are required.
Posted by Pity Crit at 10:45 AM