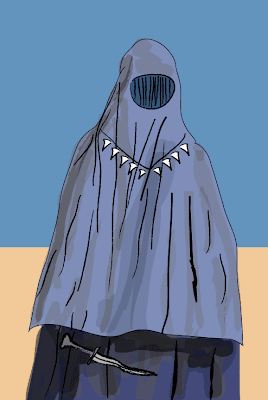 I have always loved cults and religions. The mythology of most religions makes for great reading, and the means of worship vary significantly. This is one of my favorite religions, from one of my better games.

Yes, I will be thy priest, and build a fane
In some untrodden region of my mind,
Where branchèd thoughts, new grown with pleasant pain
Instead of pines shall murmur in the wind.
-John Keats (1795-1821), Ode to Psyche

In the Second Enlightened Sekolian Cult, a Salah is considered to be the personified power and authority of the shark-deity Sekolah, holding the authority to act as a leader in the church and to perform priestly duties, as well as the sacred power to work miracles. A group of Salahs is referred to as a 'shiver'.

The word 'Salah' denotes elements of both power and authority. All Salah have undergone and survived a shark attack known as 'the Shriving', and been spared death via Sekolah's implicit intervention. This brush with Sekolah and death gives the Salahs a mystical understanding and authority over the oceans, as well as the twin processes of life and death. As a spiritual power, Salahs are said to possess the abilities to control the winds, to communicate with sharks, and to devour wicked spirits that threaten their devotees.

There is a single requirement to become a Salah: Any man or woman that has been assaulted by sharks, lost two-fifths or more of his or her body mass, and survived, is then eligible to become a Salah. This loss of body is regarded as an offering to Sekolah, and may be either deliberate or accidental. Such horrible injuries are considered to cultivate detachment from mortality in the victim that then allows them to achieve a closer relationship with the deity than other worshippers.

The faith of Sekolah is referred to as a cult because it focuses on a principle deity and his associated menagerie of spirits, but does not purport a doctrine of morals by which believers are expected to live their lives by. The doctrine of Sekolah's cult is concerned chiefly with how to honor and revere Sekolah, and what few morals it espouses pertain to individuals and their duties to various categories of other people, such as spouses, family, and mamluks.

The modern cult is more temperate than its predecessors, who were blood-soaked and aggressive. It is presently led by one Iber Salah, who has distinguished himself by forbidding his Salahs to set foot on soil that is not part of the Guatican Co-Prosperity Sphere. This has led to a number of foreign Salah to reside aboard houseboats and the like, and is interpreted as a tacit support for the Shah's recent expansionist policies.
Posted by Pity Crit at 9:06 AM