I have been playing around with some ideas for a modern-day class-less system. It's going to be a while before Wizards publishes another d20 modern book, if ever they do. Also, I am skeptical that the game mechanics will be particularly robust.

So here's an idea:

At character creation, each player designs their character by selecting two "squares" from the following (let's call them General Squares): 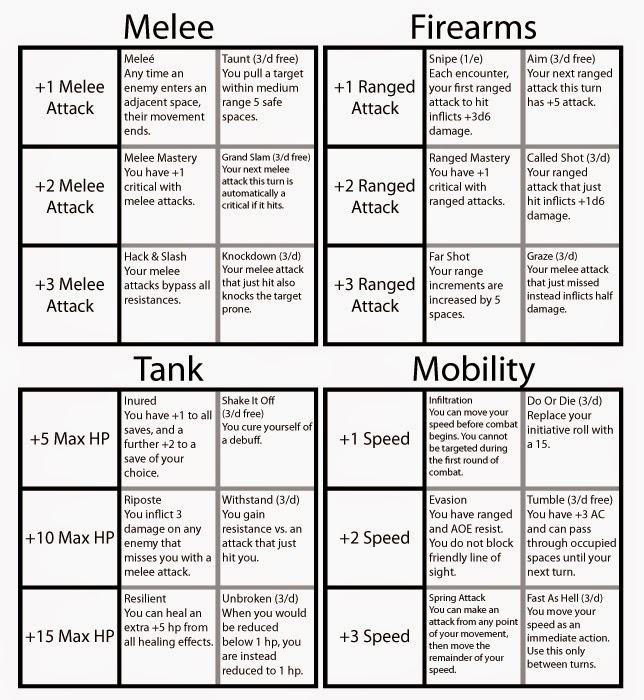 This is supplemented with a third square from the following (let's call them Specialty Squares): 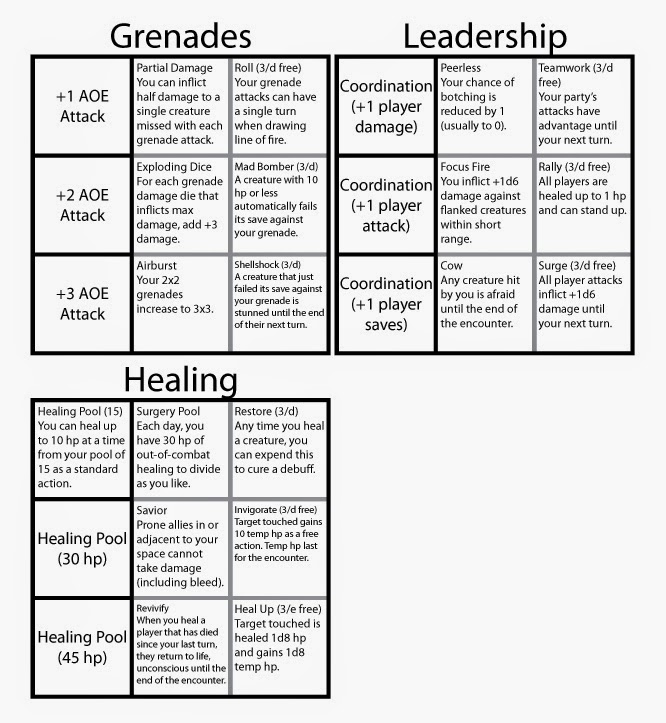 The squares that you choose will define your character progress options. The General Squares contain abilities are useful to many character builds, while the latter Specialty Squares are more unique, class-like benefits that allow a character to specialize in a particular party role.

Your three chosen squares should go on your character sheet.

At level 1, choose one of your squares to start off in, and circle the first ability listed in the upper-right corner. For example, if you choose the melee square, circle the "+1 melee attack" ability. Great, now you are slightly better at melee combat!

Each time you attend another game session, circle another starting square, or else one that is below or to the right of an already-circled square.

I can explain this better via another example: having taken "+1 melee attack", you can choose the "+2 melee attack" ability, the "Meleé" ability to its right, or work on another square entirely. If you select the Meleé ability, you could then progress to the "Taunt" ability after another session.

•Weapons have +2 to hit when wielded two-handedly.
•Ranged weapons attacking beyond their given range have disadvantage.

•Players start with a base of 15 hit points regardless of class, or base HP equal to their Constitution.
•Critical hits just inflict maximum damage.
•Players have a base movement of 6 spaces.
•Modern armor imparts +1 AC at a cost of -1 movement, up to +4 AC. Shields give +1 AC without a speed cost.

•Any debilitating condition is treated as a "debuff" and can be cured the same way, via the healing square.

Give It A Shot

The idea of having all of one's character advancement options on a single piece of paper really appeals to me, especially in a modern setting. Nothing makes these incompatible with feats, either.

It could use a little polish, one more grenade ability, and a couple more general and specialty squares. Still, I like this idea.
Posted by Pity Crit at 11:34 AM