Forgotten Realms: A Days Of Future Past-style dark future in which Lolth has devoured all but a handful of her fellow deities, leaving only the most interesting. As a result of her dominance, she has spun a sun-occluding cocoon around the entirety of Faerun, while the remaining (otherwise hostile) deities’ followers strive desperately to survive or escape the spiderscape that their world has become.

It’s not my best idea and I am certainly no great expert on the Forgotten Realms, but it seemed like fun to try and flesh the concept out.

Lolth has always been powerful in the Realms, but as of 1579 DR she has become the uncontested supreme deity of the Realms. She has devoured, subverted the worship of, replaced, or driven off nearly every other divine force on the plane. Lolth has absorbed the divine portfolios of Shar, Mystra, Kelemvor, and anybody else that you don’t feel like having around. Ao has not responded to any deities’ communications or objections regarding this unfortunate state of affairs. This has had a number of major effects on the Realms:

The Deluded Faithful: Some of the deities killed by Lolth were replaced by her without notifying their followers. Thus, a cleric of Chauntea might still be granted spells and try to work within the newly spider-oriented ecosystem, with ever-growing madness resulting from the mental gymnastics necessary to account for “their deity’s” behavior.

The Few That Remain: A handful of the gods have avoided meeting their end through an abundance of foresight, their worshippers’ zeal, or by seizing on the chaos of Lolth’s super-apotheosis to devour other deities and increase their own personal power. Though normally hostile with each other, Lolth’s supremacy has made strange bedfellows of the remaining gods and their followers. My suggestions for the survivors: Bane, Sune, Talos, and whatever deity your players want to play a cleric for. 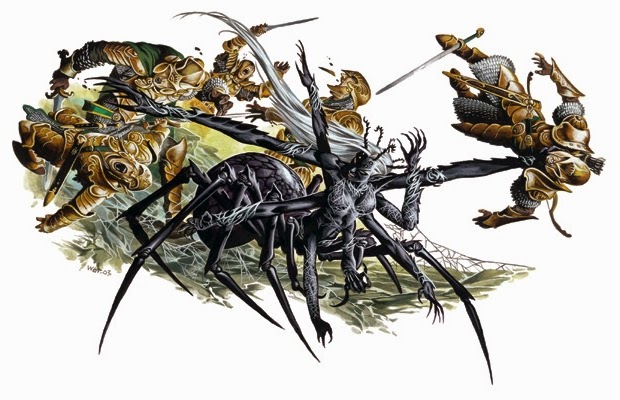 The World According To The Spider Goddess

Though Lolth’s accumulation of power was perceived as a threat by most creatures on Toril, it was on the Night Of Eternal Silk that it became clear that her power was literally unmatched. On that horrid night, she slew Lathander and emerged into the sky, vast as the moon, and horrid enough to drive many mad. She spun a vast cocoon around the entire planet of Toril, muting daylight sufficiently for the Drow to withstand its effects. The cocoon also severed Toril from other planes with the exemption of an ever-increasing number of portals to the Demonweb Pits.

Webs As Weather: Many of the natural systems of the world are no longer functioning few to lack of divine maintenance. For example, most rain consists of a moist, sticky webbing, "ballooning" immature spiderlings, or venom, while photosynthetic plants are dying out in favor of more fungal specimens.

Spider Magic: Lolth has coopted much of the magical weave that surrounds Toril. Magic that matches her sensibilities is more powerful. Web (and any other Lolth-appropriate spells) are one spell level lower than otherwise. Summoning spells do not function unless the creature they call is from the abyss or elsewhere on Toril. That kind of thing.

Genocide: The Drow have eradicated many of the other races on Toril. For example, there probably aren’t very many non-Drow elves left. Another thing: I don’t know why this would come up in your game, but one example of Lolth’s far-reaching, world-destroying powers is that about one in five children born to other humanoid races are inherently evil Driders, with that figure increasing steadily over time.

Defeating Lolth is no longer an option. The cities and temples of Toril’s surface are shrouded in webs and haunted by the Drow and their increasingly powerful servants. Wherever the players are hiding, they are one of the few remaining forces capable of acting in opposition to Lolth’s wishes. Maybe any survivors have been driven below-ground, as the Drow once were.

Escape: Having cocooned the entirety of the planet, Lolth is proceeding to suck it dry. It is only a matter of time before the entirety of Toril is pulled into the Abyss, vastly increasing Lolth’s holdings there. The players must find a way to pierce the cocoon and escape with as many survivors as possible.

Oghma Might Know: If I were you, I’d have the players travel to what’s left of Candlekeep to consult with what’s left of Oghma, whose drained, cocooned cadaver resides deep within the city. The city would make a pretty wicked hex crawl if you found a map of it and wrecked it. Candlekeep is certain to be watched over by a troupe of Drow as well as a number of demons.

Moonblades, Obviously: Oghma probably thinks that moon blades are the only thing with the right sympathetic magic to cut Lolth’s sky-web. Not enough to get rid of them, mind you, just enough that one could create a gate to another plane and escape. The players will need to find a moonblade and perhaps more difficult, an elf that can wield it. I leave the details of that as an exercise for the reader. 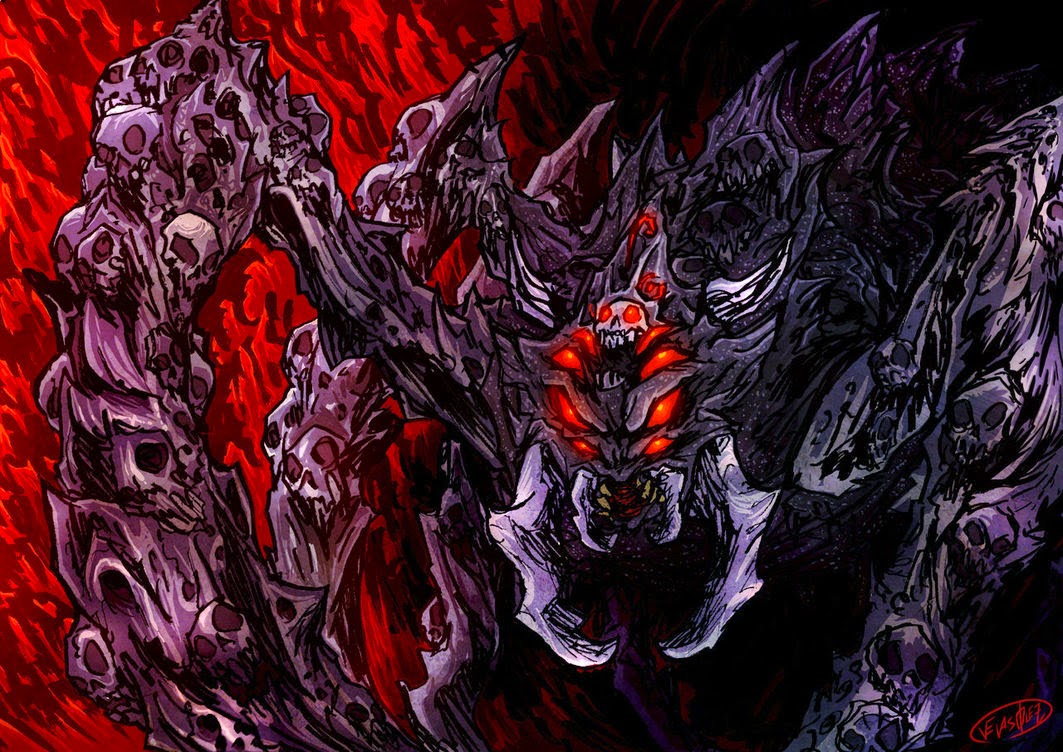 Here are some more things that I think would happen if Lolth were goddess supreme:

Cannibal Drow: The dark elf women eat their males after having sex with them. I don’t know why that would come up in your game, but there it is.

Eight-Legged Blasphemies: I really like the idea of other deities’ angels being eaten alive from the inside by parasitic behavior-controlling spiders, such that they believe that they are still severing their (dead) divine patron even as they carry out the bidding of Lolth’s priestesses. I’d call them “Akkabishai”, derived from the Hebrew word for spiders.

The Doubling: Hey, what if black widows doubled in size each generation until they were the size of buildings? Then what if the Drow used them as living siege engines? Just a thought!


Hellmouths: Making a portal to Demonweb Pits should be pretty easy at this point since this prime material plane is halfway dragged into it, already. I’m thinking giant crevasses from whence spider-demons constantly drag themselves forth into the world. Spidery hell-wraiths made from conglomerated souls of dead non-Drow, et ceteras.
Posted by Pity Crit at 2:31 PM