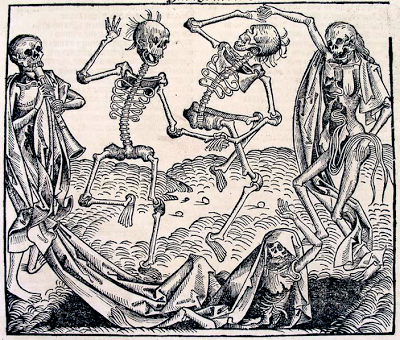 People have a lot of conflicting ideas about what should happen when a player dies. Permadeath has some outspoken advocates, while others are perfectly happy with a revolving door of relatively cheap raise dead spells. As written, the 5e D&D raise dead spell has no permanent penalties for death, though I think this is an area of the rules where DM tinkering is especially expected to make his own mark.

(Probably) The Most Popular Ideas

That’s it. You're dead. Dungeon masters espousing this method have a noted tendency to use the words “gritty” and “verisimilitude” in their blog posts. The “system shock” checks from 1e and 2e could arguably represent a form of this.

The way it was in 2nd edition. If you passed your system shock check, you would return to life with a permanent loss of 1 constitution point.

The 3rd edition way. You come back, you lose a level. The drawback here is that having died once, you are more likely to die again, far more than due to the loss of a CON point. In Pathfinder, raise dead inflicts the loss of two levels, while the higher-level resurrection reduces this to one level.

In 4e, a character would suffer a relatively minor penalty for a while (-1 to d20 rolls for six encounters). In my view, it isn't even worth having such a minor penalty. You might as well not do anything. It's not like it's easy to die in 4e.

Raise dead in 5e inflicts larger penalties (-4 to attacks and so forth) that disappear gradually over the course of a few days. It seems like temporary inconvenience has been settled on as the best method to allow people to continue playing their character without making players lose their fear of death. I'm definitely down with this.

In all the above cases, the raise dead spell/ritual required the expenditure of gold. In 5e thus far, there really aren't that many ways to spend gold. It looks like raising dead is probably the main thing you spend gold on.

Death penalties are controversial. They not only touch on a player's preference for D&D edition, but also character/story investment, players' personal loss aversion, and how much a player wants to be challenged or relaxed during gameplay. So why not allow players to select their own personal death penalty?
In one campaign, I allowed players to choose from the following:

When you are mortally wounded, you are unable to participate in combat until further notice. You cannot recover from this state until you have had rare medicines applied that cost 50gp x your level and require a full day to apply.

When you receive a mortal wound, you die forever. As compensation, you begin the game at second level (or a level higher than you otherwise would).

When you receive a mortal wound, you cannot take action of any kind for the rest of that encounter and are stable at 1 hp. Additionally, you suffer a permanent -3 max hit points (I feel like this is less painful than a CON point loss, but still completely undesirable).

"Mortal Wound" in this case is the reduction to below -15 hp, my favored threshold for death.

You might consider adding a random side effect of returning from the afterlife.
Posted by Pity Crit at 10:11 AM