The Shadow of the Torturer 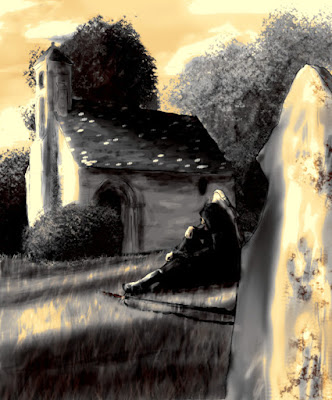 “I was sitting there, as I said, and had been for several watches, when it came to me that I was reading no longer. For some time I was hard put to say what I had been doing. When I tried, I could only think of certain odors and textures and colors that seemed to have no connection with anything discussed in the volume I held. At last I realized that instead of reading it, I had been observing it as a physical object. The red I recalled came from the ribbon sewn to the headband so that I might mark my place. The texture that tickled my fingers still was that of the paper in which the book was printed. The smell in my nostrils was old leather, still wearing the traces of birch oil. It was only then, when I saw the books themselves, when I began to understand their care.”

His grip on my shoulder tightened. “We have books here bound in the hides of echidnes, krakens, and beasts so long extinct that those whose studies they are, are for the most part of the opinion that no trace of them survives unfossilized. We have books bound wholly in metals of unknown alloy, and books whose bindings are covered with the thickest gems. We have books cased in perfumed woods shipped across the inconceivable gulf between creations—books doubly precious because no one on Urth can read them.”

“We have books whose papers are matted of plants from which spring curious alkaloids, so that the reader, in turning their pages, is taken unaware by bizarre fantasies and chimeric dreams. Books whose pages are not paper at all, but delicate wafers of white jade, ivory, and shell; books too whose leaves are the desiccated leaves of unknown plants. Books we have also that are not books at all to the eye: scrolls and tablets and recordings on a hundred different substances. There is a cube of crystal here—though I can no longer tell you where—no larger than the ball of your thumb that contains more books than the library itself does. Though a harlot might dangle it from one ear for an ornament, there are not volumes enough in the world to counterweight the other.”

― Gene Wolfe, The Shadow of the Torturer