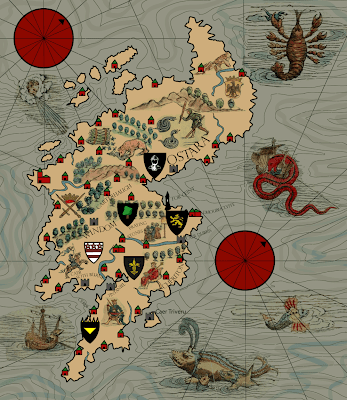 I've been too busy to post, so I thought I would upload this old campaign map that I made. It was printed on colored stationary so that the minor color differences wouldn't show at all. The villains of the setting were a circle of knights that has betrayed an Arthuresque figure. Their coats of arms are visible on the map, indicating what areas they controlled.

The campaign features bandit knights, Tamlin, a Christianity cognate sweeping away pagan religions from a fantastic British isles, St. Brandon, and a really cool dragon that deserves its own update. The monsters on the map are taken from the Carta Marina, a 16th-century ancient map of northwestern Europe that should be required viewing for all d&d players. I would draw your attention in particular to the creature near the bottom of my version of the map: it's a 16th-century cartographer's version of a whale!
Posted by Pity Crit at 4:57 PM