Clockwork Prawnalope aka "The Brillig Beasty"

This was the boss of the "futuristic" clockwork dungeon that my PCs have just hacked their way through. It was a pretty neat dungeon, I'm digging the clockwork chic. I omitted the limb loss stuff that all my bosses/minibosses in this campaign have. 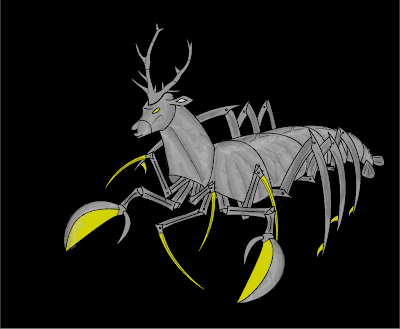 -Ram: When struck by a ranged attack or spell, the prawnalope may immediately charge the source of the damage and make an attack, assuming that the target is within its movement range. If the attack hits, the target is knocked prone unless he is wearing heavy armor.

-Death: When destroyed, the prawnalope explodes, causing 8 fire damage to creatures within short range.
Posted by Pity Crit at 1:34 PM