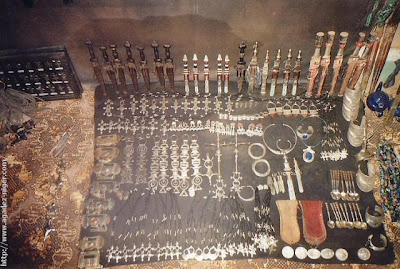 17. Production Value - Treasure Art: If you have a black and white printer and an internet connection, you can find pictures of your treasure. I haven't done this in a long time, and every time I remember to I kick myself because there's nothing cooler than being handed a picture of your newly obtained hoard of goodies. Something fun that certain boxed sets have done is have cards for each item with a picture on the front and the item details on the back --i.e. nothing beyond the skills of your average computer using gamer.

18. Style - Reward What You Like, Punish What You Hate: For years I would offer to let people start out with extra experience points if they typed up a character background. I know that many DMs require this. The thing is, I hate them. Every time I read one I'd get bored. It's rare that I would actually finish an entire history unless I was looking for plot hooks. One day I had an epiphany: why am I rewarding players for boring me? So I stopped asking for character histories, and when I need to involve backgrounds it will be more along the lines of things that I want, like me giving them perks in exchange for accepting a certain amount of hassle-causing backstory. Another habit in the same vein that I have been cured of is trying to separate my emotional reactions from the rules of the game with regards to rewarding players. I'd think things like "Paul sure made that game less fun for me, tonight." And then I'd give him as much experience as everybody else. Your fun is important, and your opinion of whether players are fun or not fun is probably the best barometer your gaming group can get. Similarly, if someone is flexible about the rules and isn't always waving the rulebooks in your face, you should feel freer to give them a little leeway with the rules. If a player is a stickler and gets in your face about every minor rules mistake, don't feel bad about applying the same standard to them.

19. Style - Don't Be Scared To Change Things: A bad habit that I rid myself of only recently is trying to run modules or campaign worlds exactly how they are written. I guess I was convinced that if I could run things exactly as they were written, I would end up with the best game possible. This is untrue. Firstly, most mainstream game designers are kind of lazy and their modules are often not playtested or especially inspired. For the really mainstream games things have to be oriented toward the lowest common denominator, and so will be less interesting to people that rate low on the Aspergers scale. Secondly, no matter how good a module is, the author cannot know how the pacing is going in your game, because this will vary every time the module is run. What might seem like a great time to ambush the players on paper may in fact be when the players are getting cranky because things are too difficult. Fudge the module a bit, delay or omit, replace and swap. Your game will be better for it.
Posted by Pity Crit at 4:45 PM

Labels: exposition, how dare you insult my game sir, vitriol