The Kitab al-Bulhan (The Book Of Wonders) 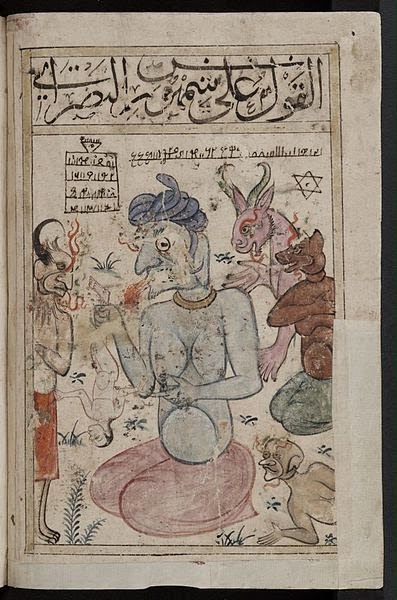 The real-life Kitab al-Bulhan is an amazingly illustrated treatise on astrology and geomancy. It looks like I'd expect a spellbook to look. It depicts constellations, sinister-looking djinni summonings, and what I presume to be semi-magical fauna.

If you are going to have your wizard find a scroll or spellbook, you are honor-bound to make a handout along these lines.

If you go with spellbook, you might want to include a few extra options: so long as they hold it in their hands while casting a summoning spell, the summoned creatures have +2 attack. Perhaps you should also include a ritual whereby one can summon a perilous djinn and interrogate it? Yes, definitely.

If you spend 100gp on rare incenses and various metal powders, you can spend six hours to conjure an invisible spirit possessed of significant metaphysical knowledge. You attempt to coerce magical secrets out of the inherently hostile creature, with varying results (reroll redundant results excepting 1s):