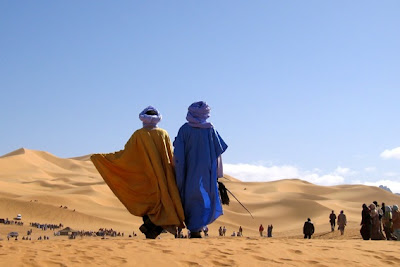 This is a write-up for a campaign that I ran based in a fantastical version of the Sahara desert. The customs and caste system outlined below are more or less based on the fascinating real-life Tuareg peoples, an amazing culture on whom Frank Herbert based the Fremen. The culture did not end up featuring as prominently as I had hoped, for reason that I will delve into in successive blogs.

We are known as the free. We are the favored people of the gods, created by Ivory Father to people the earth and be good. Ivory Father made the sky and the world, and had children. His children created the beasts of the sky and land to make the world more seemly. Ivory Father created mankind out of snakes, and told us that we are his finest creation --the other gods agreed. Eventually -and this is something the holy men discuss endlessly- Ivory Father died, leaving his children to care for us. His final instructions to mankind were to "Live free and be well."

And indeed, your people live a free life of herding animals from one oasis to another, always following water and the seasons. There are many dangers in the desert, either from divine mistake or deliberate challenge to mankind. Each god or goddess has a favored desert tribe. Yours is Solarian, whose kindness warms the earth.

Your ways have been shaped by the gods and the needs of the desert. Your tribes are divided into castes with unique duties and privileges. The castes of your tribe are:

Ihsid (warrior-aristocrats, +2 Str, -2 Wis)
You are permitted to wield sacred Takoba swords, and even start out with one. You begin the game with the quick-draw feat. You also have a tribal enemy, against whom you have practiced fighting and deal +1 damage against.

Ineden (blacksmith-wizards, +2 Dex, -2 Cha)
You may cast a number of 0th level spells each day equal to your Wis mod. You begin the game with three potions of random type.

It is considered spiritually unhealthy to touch iron unless you are a member of the third cast (Takoba swords have hilts of ivory or other, nonmetallic substances). Holy men are chosen for their blue eyes, while the Ineden have much darker skin than other castes.
Your men wear veils; it is considered shameful to show one's face (especially one's nose or mouth) to strangers, especially women to whom you are not married. These veils are always indigo, made by pounding plants into cotton cloth. This results in the blue dye rubbing off onto one's skin. After many years, one's skin is permanetly stained blue in the affected regions. In addition to protecting one from the dangers of the desert, veils protect from evil spirits and maintain one's dignity. Indigo and blue are holy colors.

The Old Evil and the First Men

The very first man, Banu Antania, was created as powerful and long-lived, and for whatever reason despised Ivory Father. After Banu deserted him, Ivory Father created a man and woman for each of his children, whose descendants form the tribes today. Eventually, Banu corrupted each of the first men and women, causing them to hate Ivory Father. As they grew more and more wicked, they slowly lost the gift of human form, becoming more similar to the serpents from which they were made. Their children feared them and, recognizing the wrath of Ivory Father, cast them out into the desert.
Eventually, Banu and the other first men murdered Ivory Father. The gods had by then all taken oaths not to kill Banu, and so they locked him and the first men away in chains beneath the earth where they could do no more harm.
The tribes now can live their lives without being tampered with by the Banu Antania.
Posted by Pity Crit at 12:04 AM