In this game I had a little blurb or benefit associated with each level of the various knowledge skills. This ended up being a little too much work to keep track of, but wasn't too bad for the smaller player group at the time.

1: The most popular deity in your region is Solarian, here is his profile and symbol:

Solarian is god of the sun, innocence, silence, youth, and beauty. His Hierophants describe him as a mute child, and say that he displays very little interest in or capability for understanding speech. The rooster is holy to him.

2: Here is a list of the other widely accepted deities and their associations:

3: Here is the genealogy of the gods:

4: You may purchase potions of cure light wounds for 50 gp each, at any oasis where you are able to peacefully interact with the market.

You are also familiar with the Hexachord: 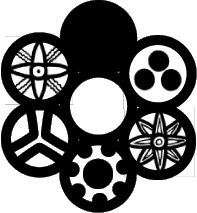 It represents the totality of your pantheon, with the central circle being mankind and each deities' symbol encircling it. They are, starting from the top and proceeding clockwise, Ivory Father, Aspects of War, Ilia, Great Worm, Spirit of the Soukh, and Solarian. Ivory Father is included out of respect, Defiled Woman is regarded as a demon and as such is not included.

5: More about the Genealogy of the Gods:

Deities on the left side are male, deities on the right are female. The higher a deity is on the hexachord, the more powerful he, she, or it is in relation to the other deities (ie Ivory father was the most powerful, Great Worm is the weakest). Defiled Woman's power remains largely unknown.

7: Extra domain option
You gain access to a domain pertaining to a deity of your choice, you retain the option of access to that domain.
Posted by Pity Crit at 11:38 AM